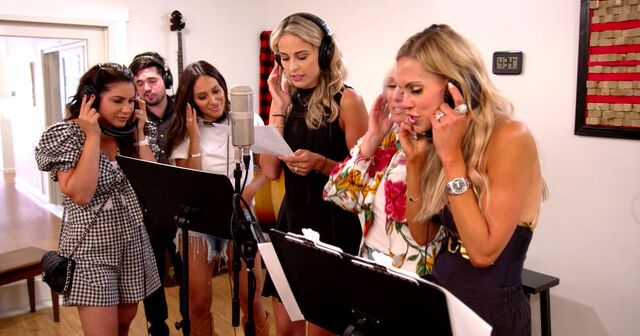 Summarizing the Genuine Passaic Full-Service Gas Stations starting to feel a bit like groundhog day, a movie I’ve never seen (not @me), but one we all use as a shortcut to getting stuck in an endless, perilous time loop. It’s just that women get together, Teresa says a bunch of stupid, indefensible bullshit, and nobody does anything. It’s the show over and over again, attached to the underground whims of a human cudgel wearing too much eye makeup. At least in this episode, we don’t need to see her a ton, but we have one of the worst group activities ever.

Yeah, I’m talking about when all the women go to something called NashVox Studios, which is a place where normal people can come, work with a songwriter, and then record a track. I feel like it was Frankenstein’s lab that also brought us Rebecca Black’s “Friday” and, if we’re being perfectly honest, Simon Van Kempen’s “I Am Real.” Now I won’t talk about the shit out of Missy G’s “On Display”, one of the best hits in the Housewives firmament pop.

I couldn’t watch this session at all. It is, as children would say, gnashing your teeth. It’s so cringe-worthy that I turned into Cringer, Prince Adam’s pet. The worst is the endless RuPaul’s Drag Race songwriting challenge where each queen verse contains a variation of “snatch the crown”.

Not only is the writing as embarrassing as shitting your pants while kissing Andy Cohen on live TV, the recording is even worse. The women’s voices sound like, well, shit your pants off while making out with Andy Cohen on live TV. They don’t even split verses or lines or anything like they would on drag race. You just had a murder of crows croaking over each other to a lone guitar that’s about to give way under the weight of vocal incompetence. Between that and the miserable Richard Marx song that ended the final season of RHOCit’s a really bad time for actors who cosplay Josie and the Pussycats.

Meanwhile, all the guys (minus Tiki Barber, who has a real job other than “construction, I guess [shrug emoji]”) are by the lake in a boat that has a slide in the back and somehow looks like the equivalent of a yacht in a mobile home. I don’t know for sure, but it looks like something Victoria Denise Gunvalson Jr. had at some point in her life. Joe Gorga brings a strap-on on the trip because there’s a joke about Frank Catania having no balls. Did I forget something? Did he have them removed from testicular cancer? Did they just shrivel up and fall off from all the “supplements” he took? Was it his metaphorical bullets that were taken by Dolores? I don’t know, but Joe brings him a strap-on and makes everyone take pictures of it, and it’s the gayest straight thing I’ve seen since Tucker Carlson home videos.

On the boat, the guys talk a bit about the drama of the day, namely the fight that broke out between Teresa and Marge at dinner the night before. Well, it was actually just Teresa using the glasses and cutlery of an unsuspecting barbecue to smear and assault our Marge, but we don’t need to say too much. Luis, Teresa’s fiancé, says he’s never seen her act like this before. But the guys tell Luis that it’s fine with guys, but never get involved in women’s affairs. Unless, of course, they get involved and say that Jen is a bad person or that Teresa shouldn’t spread rumors that Evan or Joe are mad at Bill for not standing up for him against Jennifer. But other than that and all other occasionsdon’t meddle in women’s affairs.

Speaking of Margaret and Teresa, Our Lady of Gabagool doesn’t want to bother to go sing, so she drags Dolores to the Boot Barn to go shopping. Ah, the Boot Barn. I think I went to high school with her sister, Dress. Do you know her? Dress up the barn? She drove a Volkswagen called the Fashion Bug.

While they’re shopping, Teresa uses my least favorite justification for her behavior. She says Marge kept biting the bear and she shouldn’t be surprised when she got bitten. It’s the dumbest thing I’ve ever heard (and it’s another thing that often comes up on drag race as well), and I listened to the Giggly Squad. This line of thinking is basically, “I’m a violent person who can’t control his temper, but because you know I’m a violent person who can’t control his temper, it’s actually your fault that you were attacked because you couldn’t control yourself around me, a person who can’t control me. It’s an amazing elliptical, like that row of machines right in front of the treadmills where everyone is running around watching Excellent chef rebroadcasts on gymnasium televisions.

After a brief interlude where we meet my favorite RHONJ Drunk friend Bill Ayden, who wears a backwards Ferrari polo shirt and a creepy wig, a woman named Abbie shows up to decorate the house for dinner. She basically puts an old van in the yard, then throws away Michael’s Magnolia Home Décor Starter Kit and calls it a hoe. (That’s also what my friends shout when I trip over the bar. “Ho down! Ho down!”)

Everyone sits down to dinner and Teresa apologizes for not acting like herself the night before. She wants to apologize to the group, however, not to Margaret, as she insists she was provoked into behaving this way. Everyone is like, “Oh, that’s great, Teresa. Apologies,” but that is not the case. Joe Gorga says she wouldn’t have apologized at all in the past, so this half-ass apology is better. It’s like saying, “Oh, she didn’t kill the rabbit; she just mutilated him, so let’s be glad Marlon Bundo isn’t dead. No, that’s not how it works. How about not hurting the bunny at all? Hmm? How about not giving someone credit for being only partially decent?

Marge won’t let herself be at the end of the table, and neither should she. Whether or not she provoked Teresa (I don’t think she did), Teresa should never have thrown a bunch of innocent dishes at her. She might even go full Housewives Apologize and say, “I still don’t like what you said about Luis, but I went too far. But she won’t because she’s Teresa, and she’s worse than anything in Dress Barn and Fashion Bug combined.

Interestingly, the tide is turning against Teresa this season. Frank, of all, is the first to say that what Margaret was doing wasn’t so bad and that Teresa behaved abominably. Jackie, who is still part of Team Margaret, says she is fed up with Teresa dictating the temperature all night, that they are still looking after her and trying to contain her nuclear explosion of anger as it shouldn’t be their job. Melissa says the table is being held hostage by Teresa. These are not good ways to talk about the woman who thinks it’s all her show.

When Marge speaks up asking for a better apology, Teresa makes a joke about Margaret never missing dinner when she’s basically the same size, because that’s where Teresa goes. She can’t argue a point, so she can only throw punches and insults. It’s the last resort of idiots. Teresa begins to implicate Melissa, trying to get Melissa to tell Margaret at STFU, despite not using an acronym.

What I really wanted was for Melissa to say no. What I wanted was for Joe to say he wasn’t going to let his wife say that. What I wanted was for Jennifer to tell Teresa to take it down a notch. What I wanted was for someone to say, “Teresa, you’re wrong and you need to apologize.” I get it, Melissa and Joe just want peace in their family, but if they keep sticking to Teresa’s insane loyalty rules, the ones that aren’t reciprocated, mind you, then she’ll never learn. It will never stop. She will continue to be the thermometer of the room and the terrorist of all social situations. There’s only one way to break groundhog day time loop, and someone has to stand up to Teresa. It just seems like everyone but Marge is too dumb to do it.

Dame Brian Moylan breaks down all the gossip and drama, on and off screen, for dedicated students of the arts and sciences of reality television.

By submitting your email, you agree to our Terms of Use and Privacy Notice and consent to receive email correspondence from us.

Major retailers are entering the e-commerce market for designer goods

What is a funeral loan and how do I get one?