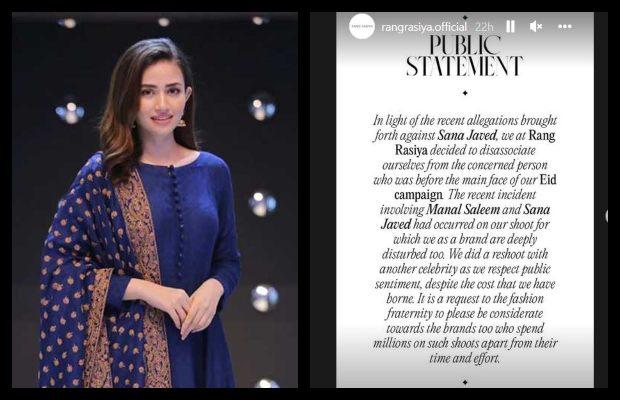 The development follows the ongoing controversy related to Sana Javed’s conduct during a particular fashion shoot.

The brand also confirmed that the recent incident involving both Manal Saleem and Javed happened during their campaign shoot.

According to a statement released by the fashion brand, it has dissociated itself from the person concerned who was before the main face of our Eid campaign.

The fashion brand said it was “deeply disturbed” by the incident and opted to resume filming with another celebrity.

The brand released a public statement on its official Instagram page:

“In light of the recent allegations made against Sana Javed, we at Rang Rasiya have decided to dissociate ourselves from the person concerned who was before the main face of our Eid campaign.”

“The recent incident involving Manal Saleem and Sana Javed happened during our filming and we as a brand are also deeply disturbed. We did a cover with another celebrity as we respect the public’s sentiment, despite the cost that we have borne,” he added.

“It is a request to the fashion fraternity to be equally considerate of brands that spend millions on such shoots on top of their time and effort,” Rang Rasiya said.

Model Manal Saleem had come forward to share on her Instagram story how an actor she worked with was putting her down on set.

“Asking all clients to never ask me to shoot with an actress/celebrity again. With their self-proclaimed attitudes, they think we’re ‘do takay ki’ role models,” Saleem said without naming the person in question.