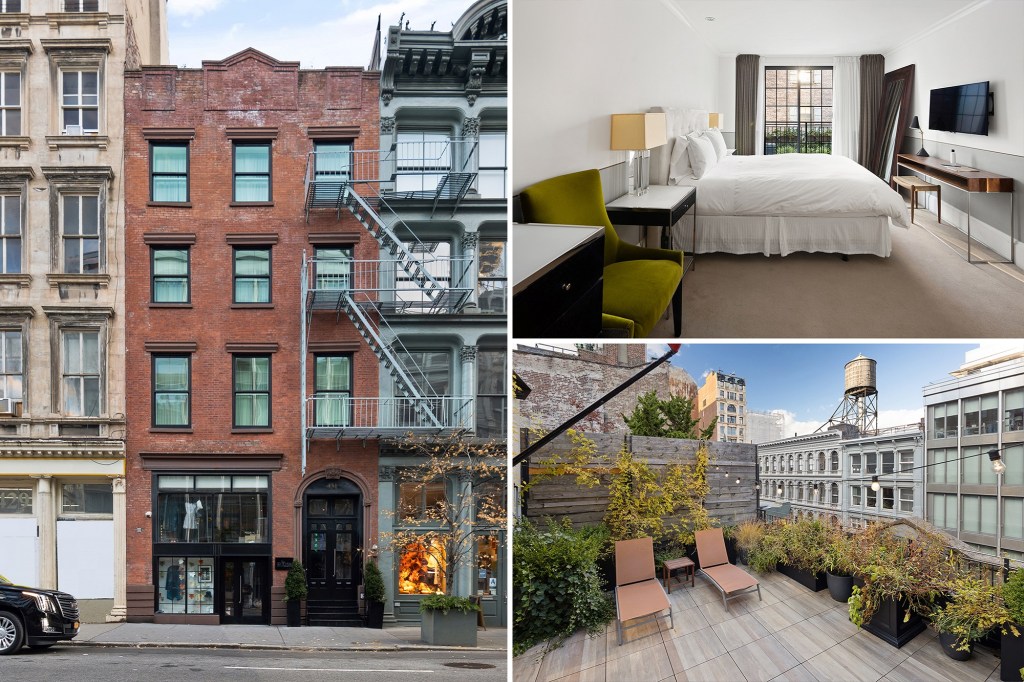 Eloise has never had it so good.

What is now a 14-room hotel in Soho – whose guesthouses wrap around a mosaic-tiled interior courtyard that looks more like Paris than the Plaza – could be a single-family home for the 1% voucher with extravagant vision and the stomach to deal with the Ministry of Buildings.

The four-star hotel at 431 Broome St., on the corner of Crosby with a Baroque brick facade dating back to the early 19th century, hit the market for $ 19.99 million.

The 7,500 square foot property, with a 2,500 square foot basement and 5,000 square feet of air rights, is generally operating at 90% occupancy, which earns the current owner a handsome sum.

But the secret owners (who are behind an LLC) are ready to scamper down on other adventures, putting the hotel, which underwent a $ 6 million renovation from 2012 to 2014, up for sale.

“When you walk into the hotel you have no idea what’s inside,” said Raphael Sitruk, listing broker for Keller Williams, from France. “Then you’re like, ‘Wow, where are we? We can’t be in town! It is so calm and beautiful. It’s a very French feeling.

Sitruk added that the property could remain a hotel or even become the flagship office of a luxury brand.

But, “It’s a trophy address, so I could also see someone with a vision turn it into a single family home,” he said.

In fact, it started life as a lavish sprawl in 1825, when it was the home of the merchant George Dutch.

“The bones are there to be converted into an incredible single-family mansion,” said Colston.

He envisions the space as a modern take on the riad, those traditional Moroccan palaces with courtyard, or the rare West Village townhouse lot with a converted shed that could be used for guests, kids, or staff.

The main house, located at the front of Broome, would feature a master suite with a roof terrace, large living and entertainment areas, more bedrooms and, naturally, stairs leading down to the underground pool, spa and the gym in the basement. (A swimming pool has already been dug.)

The converted shed would be located at the rear of the property, separated from the main structure by a 30-foot-long courtyard open to the sky. It could be accessed by crossing the tiled Azulejos courtyard or via a glass tunnel that runs the length of the popular interior garden.

“Someone with a green thumb could care for internal hanging gardens that bloom year round,” he said. “A pool and spa, 10 bedrooms, a private outdoor sanctuary, a rooftop patio, and 8,000 square feet of living space in Soho?” It could be worth a lot more than what it sells for or what it does as a hotel.

“There is nothing else on the market like this,” Sitruk exclaimed. “I don’t just sell a hotel or an interesting property. I’m selling a piece of history.