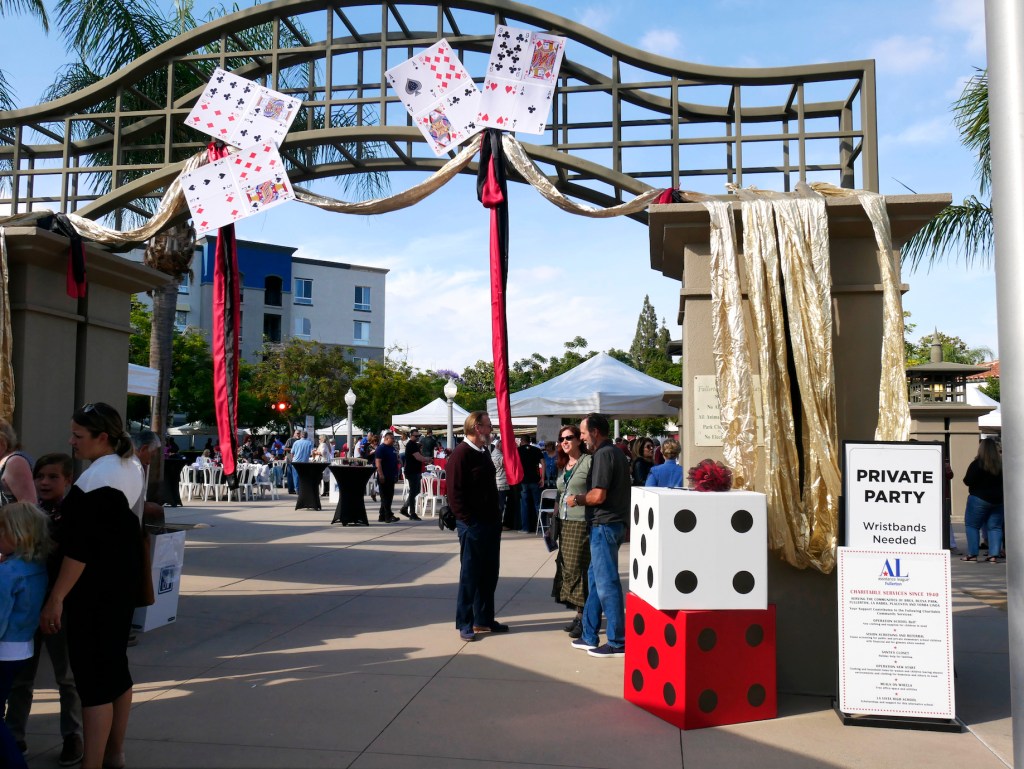 On a late Saturday afternoon in early June, laughter, lively conversation and the sounds of rock and roll music rumbled through the air from Fullerton Plaza to where my car was parked on Pomona Ave. These are the sounds of the Fullerton Helper League’s 42nd annual Taste of the Town event.

Taste of the Town entrance with casino-themed decorations.

The Taste of the Town fundraiser was an evening of food, drink, music and entertainment to benefit local philanthropic programs as well as help the Healthy Neighborhoods program and the Foster Youth Success initiative. Proceeds also benefit La Vista High School, an upgrading school in the Fullerton Joint Union School District where Assistance League members provide many opportunities for student support. Various restaurants in the area donate time and signature specials, and guests attending the event are allowed to sample as much food as they want for the price of admission. “All proceeds go back to the communities we serve through our philanthropies,” said Michele Amador. Michele had kindly invited me as a guest.

The Fullerton Relief League supports community philanthropic programs that benefit everyone from infants to adults. According to their website, the League’s philanthropic efforts include Operation School Bell, which provides $114,000 annually in new school clothing to needy students attending elementary through middle school in 8 area school districts; Vision Screening & Referral, which oversees and funds vision screenings for local school children at 20 area schools, providing glasses when needed; Meals on Wheels, which provides low-cost meals to housebound seniors who are unable to shop or cook their own meals; Santa’s Closet, which provides vacation assistance to families in need in the form of gift cards from local retailers; and Operation New Start, which supports adults and children who have left abusive environments with clothing and household items while in a protective setting.

Raffle basket stand at Taste of the Town.

It was the organization’s 42nd year celebrating Taste of the Town, which the Assistance League has organized since 1979. After having to forgo fundraising in 2020 and going virtual last year due to the pandemic, members of the Assistance League, who worked for months to organize the evening, were delighted to return in person for the event at Fullerton Plaza.

About 400 people gathered from 5-9 p.m. on Saturday, June 4, for this year’s Taste of the Town, which was themed “Vegas Style” and featured 18 of Fullerton’s top dining and dining establishments. People could prepay $70 or $75 at the door. Children 12 and under could enter for free. Wilshire Avenue was blocked off with white signs and police warning tape tied up the courtyard, where guests were just beginning to arrive. The blue arrows pointed to the Taste of the Town check-in booth across Fullerton Plaza.

During check-in, I presented my press badge, spoke to some of the friendly members of the Assistance League who worked at the booth, and received a booklet with a red wristband, which would allow me to access to food and drink. The check-in area was right next to an arch decorated with red, black and gold streamers. Large blackjack cards hung above visitors as they entered. Oversized red and white dice greeted guests. Going through the archway, I saw several tables set up in the center of the courtyard. There were even more tables in the middle of Wilshire under an elongated white tent. The restaurants each had their respective stalls on the edges of the courtyard. Fullerton police officers were present to assist with security.

A DJ stood on stage at Fullerton Plaza, playing old-school rock and roll hits, such as La Bamba, Louie Louie and songs by Little Richard and Chuck Berry, as guests mingled. In the center of the museum courtyard, there was a large red stand where all the raffle baskets were displayed in large format. Tickets for all baskets, consisting of gift certificates and merchandise, could be purchased at the event. Guests could also purchase tickets for an “opportunity” to win $1,500, $1,000, and $500 from Jeweler’s Touch.

Elvis to the taste of the city.

In light of the Vegas-style theme for the evening, the blackjack and roulette tables were featured. There was even a “casino” sign hanging from a tree next to more giant colored dice. Dealers came dressed in full attire and waited for people to play. Some guests seemed really invested in these games. However, my attention shifted more to the stage when the king of rock ‘n’ roll himself made an appearance: an Elvis impersonator in a diamond-studded suit, with sideburns and glasses sunbursts, singing a mix of fast and slow songs. He later walked around and took pictures with guests while still in character.

The Assistance League committee members had chosen this Vegas-style theme before the pandemic hit, and then were forced to postpone their plans. The pretty centrepieces that accompanied each of the tables had been prepared well in advance. Cards and poker chips curled around the stems of centerpieces sticking out of red bases. The blackjack playing cards were arranged around the rich red of the tablecloth under each centerpiece which followed the red, white and black color scheme found in the event decorations.

It was an absolute pleasure to be invited to the 42nd annual Taste of the Town event. With my red bracelet, I was able to taste many delicious dishes, photograph the festivities, observe the games and decorations, socialize and listen to Elvis sing.

The Relief League is one of the city’s oldest philanthropic organizations. They were organized into a guild in 1940. The League was active with the Red Cross during World War II making surgical dressings, layettes, knitwear, and helping the USO. They also extended assistance to veterans at the end of the war. In 1950, the Fullerton Chapter was chartered.

Today, the Relief League’s work has expanded to serve the northern Orange County towns of Brea, Buena Park, Fullerton, La Habra, Placentia and Yorba Linda. They have been serving these communities for 82 years. While the League was originally based in a former Episcopal Church in Amerige, they now have their own buildings across from Fullerton Police Station, including the popular Thrift Shop (formerly known as “The Bargain Box”), which happens to be their main source of fundraising.

The all-volunteer non-profit organization consists of Chapter members who volunteer to staff the thrift store and other events, Assistteens (middle and high school students) and ALPHA, professional women who have their own philanthropies and work with the Fullerton Elementary School District to provide homeless people with much-needed supplies. Currently, the Fullerton Relief League has over 260 volunteer members who work to transform the lives of children and adults through community programs.

“Members of the Assistance League of Fullerton are guided by a set of core values: love of community, friendship, respect, generosity, dignity, patience and service,” said Michele Amador. , Vice President of Resource Development, via email.

To learn more about the Fullerton Assistance League, visit https://www.assistanceleague.org/fullerton/.

Protect local journalism – please subscribe to the print or online edition of the Fullerton Observer. All editions are free, but we depend on reader subscriptions. Annual subscription is only $39/year. It just takes a minute – Click here to subscribe. Thank you for your support of the Fullerton Observer. Click here to see a copy of the print edition.